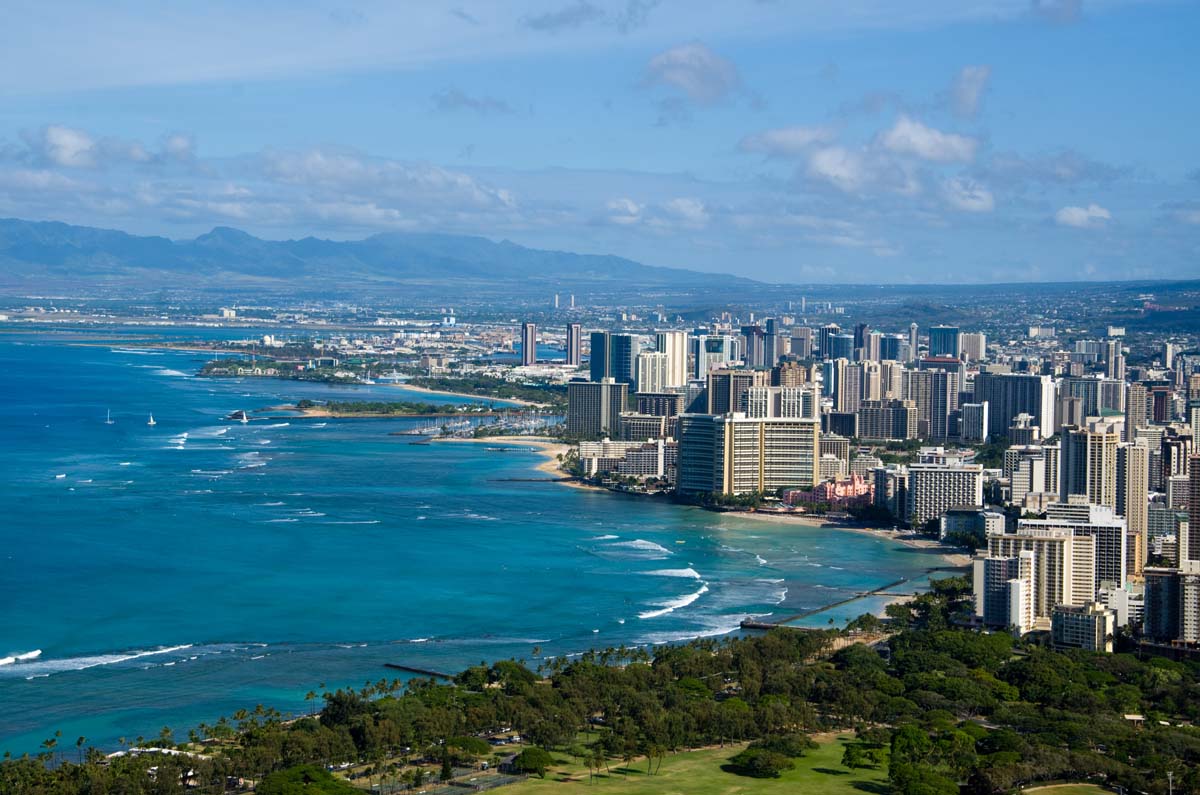 Honolulu (/ˌhɒnəˈluːluː/;[6] Hawaiian: [honoˈlulu]) is the capital and largest city of the U.S. state of Hawaii, which is located in the Pacific Ocean. It is an unincorporated county seat of the consolidated City and County of Honolulu, situated along the southeast coast of the island of Oʻahu,[a] and is the westernmost and southernmost major U.S. city. Honolulu is Hawaii's main gateway to the world. It is also a major hub for international business, finance, hospitality, and military defense in both the state and Oceania. The city is characterized by a mix of various Asian, Western, and Pacific cultures, as reflected in its diverse demography, cuisine, and traditions.

Honolulu means "sheltered harbor"[8] or "calm port" in Hawaiian;[9] its old name, Kou, roughly encompasses the area from Nuʻuanu Avenue to Alakea Street and from Hotel Street to Queen Street, which is the heart of the present downtown district.[10] The city's desirability as a port accounts for its historical growth and importance in the Hawaiian archipelago and the broader Pacific region. Honolulu has been the capital of the Hawaiian Islands since 1845, first of the independent Hawaiian Kingdom, and after 1898 of the U.S. territory and state of Hawaii. The city gained worldwide recognition following Japan's attack on nearby Pearl Harbor on December 7, 1941, which prompted decisive entry of the U.S. into World War II; the harbor remains a major naval base, hosting the U.S. Pacific Fleet, the world's largest naval command.[11]

As Hawaii is the only state with no incorporated places below the county level,[12] the U.S. Census Bureau recognizes the approximate area commonly referred to as the "City of Honolulu"—not to be confused with the "City and County"—as a census county division (CCD).[13] As of the 2020 U.S. Census, the population of Honolulu is 350,964,[14] while that of metropolitan Honolulu census-designated place (CDP) is 802,459.[15] With over 300,000 residents, Honolulu is the most populated Oceanian city outside Australasia.[16][17]

Honolulu's favorable tropical climate, rich natural scenery, and extensive beaches make it a popular global destination for tourists. As of May 2021, the city receives the bulk of visitors to Hawaii, between 7,000 and 11,000 daily. This is below the 2019, pre-pandemic, passenger arrivals of 10,000 to 15,000 per day.